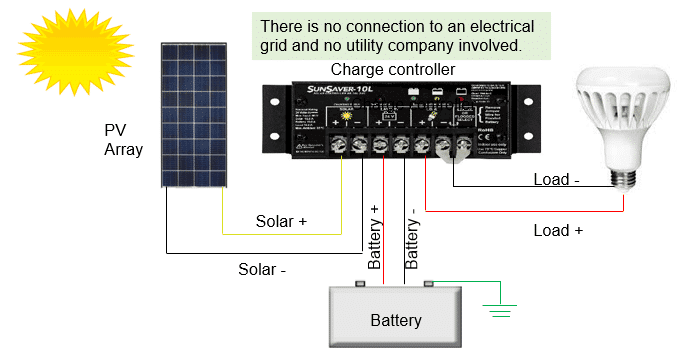 When installing a solar charge controller, it is recommended that you connect and disconnect in the following order:

In the wire diagram schematic above with DC load, sunlight contacts the solar modules, which convert solar into DC electrical power that it delivers to a charge controller. The charge controller regulates the amperage and voltage that is delivered to the loads and any excess power is delivered to the battery system so the batteries maintain their state of charge without getting overcharged. During the evening when there is no sunlight, battery power is used to run the load.

The next diagram (Figure 2) depicts the components and connections to power an AC load. This diagram with an AC load looks similar to the previous example with a DC load, except that in this example, we have added an inverter to the system. The purpose of the inverter is to convert the DC power from the battery to AC power that can be used to run an AC load like the TV you see in the schematic.

It’s important to note that the inverter is connected and powered from the battery, not the controller’s load terminals like we did in the DC load example. That’s because the inverter can have a high energy surge upon startup, and this high current surge might be higher than the rated capacity of the charge controller, whereas the batteries will be able to meet the high energy surge requirement.