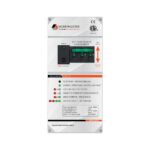 Morningstar’s Ground Fault Protection Device™ (GFPD) prevents current from following any unintended paths during a ground fault. Other ground fault detection/interruption products break the bond to the grounded conductor. When this occurs, not only is the earth bond compromised, but the battery and DC loads can also be left ungrounded and floating. For a negatively grounded system this means that the negative side of the battery and loads can float to negative Voc in relation to ground and the positive side can float to (negative Voc + Vbat). Morningstar’s GFPD better isolates the array from the battery and loads, while maintaining the bond to ground. Compatible with: